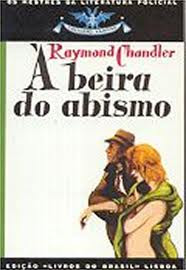 The Big Sleep (1939), Chandler's first novel, introduces Philip Marlowe, the genre's most influential series detective. His wise-cracking style and capacity to endure punishment from his foes introduced a new kind of "performance" to hard-boiled fiction, in which victory was more often verbal than physical. Chandler's ironic tone and extraordinary metaphors focused readers on individual scenes, which he excelled at writing. Many of these evoke Southern California in the late 1930s so vividly that the setting seems to become part of the plot. Most critics consider this book among the dozen greatest hard-boiled novels.
.
The narrative begins as a "wandering daughter job" and ends as a prodigal son story. Marlowe meets General Sternwood in the orchid-filled greenhouse of his mansion and is hired to track down the gambling IOU's and nude photos of his daughter Carmen, which blackmailers have obtained. On his way out, Marlowe meets both Carmen, a nymphomaniac, and her older sister, Vivian, who is married to the expatriated and now missing I.R.A. veteran Rusty Regan. Marlowe tracks the photos through Arthur Geiger's bookstore and breaks into his house when he hears shots. There's Carmen naked and Geiger dead, but his body and her negatives disappear before Marlowe can get back from returning Carmen to her father. Marlowe chases down all those who might exploit the items, chiefly Carmen's former lovers Owen Taylor and Joe Brody. Taylor turns up dead in his car, driven off the Lido pier. Brody admits to the blackmail, but is killed by Geiger's boyfriend, whom Marlowe turns in. He finally finds Geiger's body and turns the case over to his police counterpart, Detective Ohls.

A second plot begins on the novel's third morning, when Marlowe interviews the captain of Missing Persons about Rusty Regan. No one wants to cooperate with Marlowe on his self-assigned mission, least of all Regan's wife Vivian, whom he discovers has run up a gambling debt at gangster Eddie Mars' casino. Marlowe rescues her from thugs there, but she is miffed when he doesn't try to seduce her, asking for information instead. Returning home, he has to throw Carmen out of his bed.
.
Marlowe suspects that Regan may be with Mona Mars, the gangster's wife; he gets a lead on their hide-out from the girlfriend of Harry Jones, whose death at the hands of bad-guy Lash Canino the detective overhears in a celebrated scene. Mona is at a garage in the high desert east of L.A. Marlowe drives up in the evening, but is sapped by Canino and a mechanic. He wakes at the feet of Mona, who is impressed with his bluster and cuts him loose. Infatuated, he begs her to come with him, but she loves Eddie Mars. Marlowe gets a gun from his car and with Mona's aid shoots Canino when he returns – the only man Marlowe ever kills.
.
On the fifth day, Marlowe and the police settle accounts. Then General Sternwood confirms Marlowe's assignment to find Regan. On his way out he meets Carmen, whom he takes down to an abandoned oil well to practice her marksmanship. When she fires the five blanks he loaded into her gun at him, Marlowe knows who killed Regan. He confronts Vivian, not the General, with the facts. Carmen killed Regan because he refused, as Marlowe did, to sleep with her. Vivian called Eddie Mars to help her dispose of his body – he dumped it in the oil well's sump, then sent his wife to the desert to make it appear that Regan had run off with her. Then Mars set up the General for blackmail, to see if he knew of the murder. At the novel's end, Marlowe broods on death – "the big sleep" – and Mona, who helped him to avoid it.
.
The plot is not tightly-knit. According to one anecdote, when Director Howard Hawks filmed it, he sent a telegram to Chandler asking "Who killed Owen Taylor?" But this is probably apocryphal. The novel is built from four Black Mask stories, to which Chandler added repartee, bridges between stories, and many details. Chapters 24-29 especially show Chandler discovering his power, as he gives Marlowe a code and a consciousness capable of recounting repartee even-handedly. Evocative settings such as the Fulwider Building, where Harry Jones is killed, and the oil well, are late additions that clinch the theme.
.
The character of Philip Marlowe takes shape in a sketch of himself that he gives in his interview with Gen. Sternwood, which is fleshed out during the novel. He is thirty-three, college-educated, and worked as an investigator for the D.A. until fired for insubordination. Unmarried, he drives a convertible, make unknown, in which he keeps a gun and a bottle of rye. He lives in an efficiency apartment at the Hobart Arms: "In it was everything that was mine, that had any association for me, any past, anything that took the place of a family. Not much; a few books, pictures, radio, chessmen, old letters, stuff like that." 1 Waiting on the chessboard when he enters is a "knight's problem" to solve. This motif is carefully combined with Marlowe's first and last interviews with the General, whose mansion features a stained-glass window depicting a knight freeing a "naked damsel from [a] tree" (127). The knight is the historic antecedent of the hard-boiled detective, but Marlowe's irony suggests that the chivalric code is hopelessly out of date in the modern world.
.
The gap between the idealistic code he does hold and the tawdry reality he confronts permits Marlowe to utter his astounding metaphors. Carmen has "teeth … as shiny as porcelain" (4). Vivian has "ankles long and slim and with enough melodic line for a tone poem" (14). The General's "dry white hair clung to his scalp, like wild flowers fighting for life on a bare rock" (6). His butler has "a back as straight as an ironing board" (13). The prevailing tendency of these metaphors is to compare people to things, positing a mechanistic, post-Einsteinian world of time, space, mass, motion, and inertia. Chandler has a second category of metaphor, which he took from California life: Marlowe's office cabinets are "full of California climate," the coastline has "a loud sea-smell which one night's rain hadn't even dented," and the General saves his strength "as carefully as an out-of-work showgirl uses her last good pair of stockings" (51, 41, 6). These figures of speech build an alternate view of the world, deflating the pretensions of the tough-talking thugs and making the detective's ideals seem wistful.
.
The novel's theme rises from what Dennis Porter has called "the ironic form of an unnecessary journey." 2 Marlowe searches for a man everyone says he resembles, and the search leads him through the scenes and loves of Rusty Regan's life; in the final scene he learns that he caught the culprit in the first scene, when Carmen fainted into his arms. As for romance, all four of the female characters survive, but of the five men involved with them, only Marlowe remains, contemplating "the big sleep" to which his fellows have gone. Misogynist is too strong a word for this revealed plot, but "anti-romance" is not.